MY SKIN COLOR HAS NOTHING TO DO WITH MY LEADERSHIP STYLE. 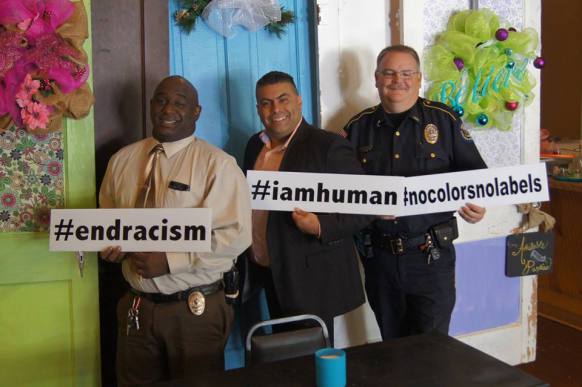 Leading the fight against racism

As a Hispanic Police Chief, I am considered a minority. I keep asking myself why it is so important to keep bringing up the fact that I am a minority.  I am a Hispanic Police Chief with 22 years of law enforcement experience and education.  I retired as the Chief Deputy of Law Enforcement in El Paso, Texas, and have served as the Police Chief of Marshall, Texas for the past two years.  I am the police chief of a 23,500 population city with the majority of the African American population, followed by whites, Hispanics, and followed by a growing Asian population. I have had a successful two years in Marshall.  We have lowered the crime rate by a combined 23% in the past two years, introduced new technology, rebuilt the bridge of trust with the community, and have a new outlook on community policing.  We have established new community outreach programs such as the No Colors No Labels Initiative.  The majority of my officers are white.  I do not feel that we have accomplished what we have because of the color of my skin.  I feel that I have accomplished this because the men and women of my agency were ready for a change of direction and leadership. The city as a whole was ready for positive change; all it needed was the right person to come along and set the course. I feel that we could have accomplished all of this regardless of the color of my skin, as long as the person had the same vision in mind. I was recently asked what the secret to my success has been.  The answer is very simple. One, remember that you are a servant of the community you represent.  Two, remember the golden rule treat others as you would want to be treated, third remember that the foundation of a successful police agency is the community and finally treat your employees fairly and with respect. That is the difference between a manager and a leader. A leader is a person that understands the job and knows the community they serve and the employees that work for them.  What I am trying to say is that I have accomplished this not because of the color of my skin or because I am a minority, but by my beliefs.  To change the culture of an agency the change must be genuine right from the top all the way down the chain.  A cultural shift within an organization can only be completed if the person at the top has gotten the buy-in from the majority of the staff, and the community.  It is vital to remember that actions speak louder than words.  The culture change has nothing to do with the color of the skin of the leader, but everything to do with the belief system that the leader is introducing into the culture.

So why are people so willing to believe Internet stories—and to incorporate the information into their worldview—without taking the minimal effort required to discover whether they’re true?

“People won’t take the time to question because there is so much noise on the Internet,” says Dr. Janet Johnson, Ph.D., a social media scholar and clinical assistant professor at the University of Texas-Dallas.

The real problem, she says, isn’t that people are gullible, but their lack of knowledge about fact checking.

“To create better digital citizens, we need to teach people how to evaluate a headline and a story,” Johnson says.

Other than checking Snopes—which everyone should always do before sharing any supposed “news” story—how can you make sure what you’re sharing isn’t complete BS?

Here are four suggestions from Shannon Rauch, Ph.D. an assistant professor of psychology at Benedictine University at Mesa.

1) Get a Second Opinion

If the story is real, surely more than one other reputable news source will have covered it, right? Check on Google.

“If you can't find the information published elsewhere, it's likely because the other news outlets have done their research and rejected the story,” says Rauch.

Even if it has been widely reported, look at how the facts are presented elsewhere. “The recent story on the bacon-cancer link is a good example of this,” she says. “While the story appeared in many different places, the interpretation of the data varied.”

2) Is It Preaching to the Choir?

“Keep in mind that Facebook users are particularly likely to accept and share these if they confirm previously held beliefs,” says Rauch.

Anyone who already has a moral problem with the dairy industry will probably be quicker to share stories that support their beliefs, even if everything about it seems implausible or silly.

Hopefully you already know that The Onion and Clickhole (and their unfunny third cousin The Daily Currant) are satire. (Even your parents should know that by now.) But did you know that legitimate news sources also dabble in comedy?

“Look for disclaimers,” Rauch advises. “Yes, the Huffington Post reported that Donald Trump wanted to buy Puerto Rico. The fact that it was satire appeared at the end of the article.”

4) Consider the Source on Social Media

Sorry to be a party poop, but yeah, you probably shouldn’t trust any stories shared on Twitter, Facebook, or your other favorite social media sites unless they come from a legitimate news source.

Rauch suggests that you “return to the practice of using news outlets for their news and social media for social interactions." Or use social to follow verified news sources.

But if your buddy, uncle, or grandma share a story from ZOMGYouWontBelieveThis.net, take it with a grain of salt or at least investigate the story before commenting or sharing.